The First Lady certainly would understand if you missed it. After all, she delivered the address on the Saturday before Mother’s Day. As “Mom-in-Chief,” I think she would give you a pass.

That said–her address is excellent. Read the transcript, or watch below.

First, it was well-organized, with elements every good commencement address should include–personalizing the address, along with offering sage advice and issuing a call to action for the road ahead. 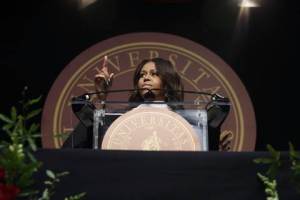 Personalizing the address. She personalized her address to the audience, from referencing Tuskegee Airmen and noting Tuskegee alums including Robert Robinson Taylor, to describing aspects of campus life unique to Tuskegee. And a well placed “TU! You know!” call and response with the graduates never hurt matters, either. (Howard University students and alumni (at the 43 second mark), however, might pitch a good-natured peeve about that.)

She then reflected on the history of the Tuskegee Airmen–and by extension, a more complete history of who we were as a segregated nation during war time. She provided examples of them rising above slights, taunts and even worse as they sought both to live their dreams and serve our country. But in so doing–in rising above–one finds freedom: by flying in the skies, or by doing meaningful work on the ground. (Coincidentally, it was announced this week that one Tuskegee Airman, Benjamin O. Davis, Jr., is being posthumously honored by West Point.)

The First Lady reminded the audience that “rising above” is part of Tuskegee’s DNA.

And in so many ways, that never-failing miracle–the constant work to rise above the bumps in our path to greater freedom for our brothers and sisters–that has always been the story of African Americans here at Tuskegee.

Offering sage advice. After reminding the audience of Tuskegee’s proud history, she discussed similar pressures and bumps she felt in the process of becoming and being First Lady. Those “pressures and bumps” are shockingly and shamefully similar. But she, too, rose above those challenges to serve the country in purposeful and creative ways.

But she did so much more than check all the boxes for delivering a successful commencement address. Let’s return to the shockingly and shamefully similar “pressures and bumps” Mrs. Obama described on her journey as our nation’s first African American First Lady.

As we know, the best speeches feature authentic stories. Mrs. Obama described how she felt about some of the most hurtful comments made about her while on the campaign trail before the presidential election in 2008. Those types of narrow-minded slings and slurs can wound the soul:

But, as potentially the first African American First Lady, I was also the focus of another set of questions and speculations; conversations sometimes rooted in the fears and misperceptions of others. Was I too loud, or too angry, or too emasculating? Or was I too soft, too much of a mom, not enough of a career woman?

Then there was the first time I was on a magazine cover–it was a cartoon drawing of me with a huge afro and machine gun. Now, yeah, it was satire, but if I’m really being honest, it knocked me back a bit.  It made me wonder, just how are people seeing me? [Emphasis mine.]

Those things can wound the soul–if you allow it. Early on, she sought to define herself:

But eventually, I realized that if I wanted to keep my sanity and not let others define me, there was only one thing I could do, and that was to have faith in God’s plan for me. I had to ignore all of the noise and be true to myself–and the rest would work itself out.

So throughout this journey, I have learned to block everything out and focus on my truth.  I had to answer some basic questions for myself: Who am I? No, really, who am I? What do I care about?

And the answers to those questions have resulted in the woman who stands before you today. 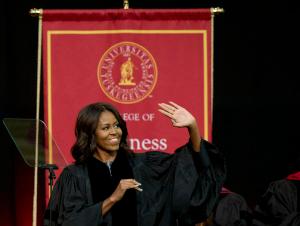 Her lived advice and counsel? Doubters and detractors will say and do what they will. No matter.

Let nothing hold you back. Rise above the noise.